Last month, the index had a breakout above 14,900 level after 12-week of consolidation, which was almost as per our  expectations, and gained 6.50%.

In May, the index had an upward breakout above 14,800–14,900 levels and formed a bullish candle with a higher-high  and higher-low price formation on the monthly chart. An analysis of various long-term technical indicators suggests the  Indian bourse is in a long-term bullish trend. The momentum indicator RSI is trending above 70 level along with a positive crossover on the monthly MACD.

On the weekly chart, the index has given a trendline breakout above a downward sloping trending line and formed a  bullish flag continuation after 12-weeks of consolidation. The price structure on the weekly chart has now turned bullish  as the index formed four consecutive higher-high and higher-low candles. The weekly RSI is now trending in a positive  slope along, with a positive crossover, and is currently placed around 67. However, the trend following indicator, MACD,  is still trending below a negative crossover in the positive zone.

Likewise, the index has a downward sloping trendline breakout on the daily chart after almost three months of down ward consolidation. It has given a breakout after forming a bullish flag price pattern on the daily chart and is currently  trending above all key moving averages. Currently the index is trending 5.25% and 15.40% above the 50-DMA and  200-DMA, respectively.

Further, as per the O’Neil Methodology of the market direction, the current market is in an “Confirmed Uptrend” with  three distribution days in the last 25 trading sessions.

Summary
All the above-mentioned multi-timeframe technical parameters, along with derivatives data and O’Neil Methodology of  market direction, suggest a bullish trend along with positive bias. We expect the index is most probably ready to move  toward 15,900–16,200 levels in the upcoming weeks. We advise our subscribers to follow the buy–on-dip strategy until  the index is trading above 15,200–14,900. 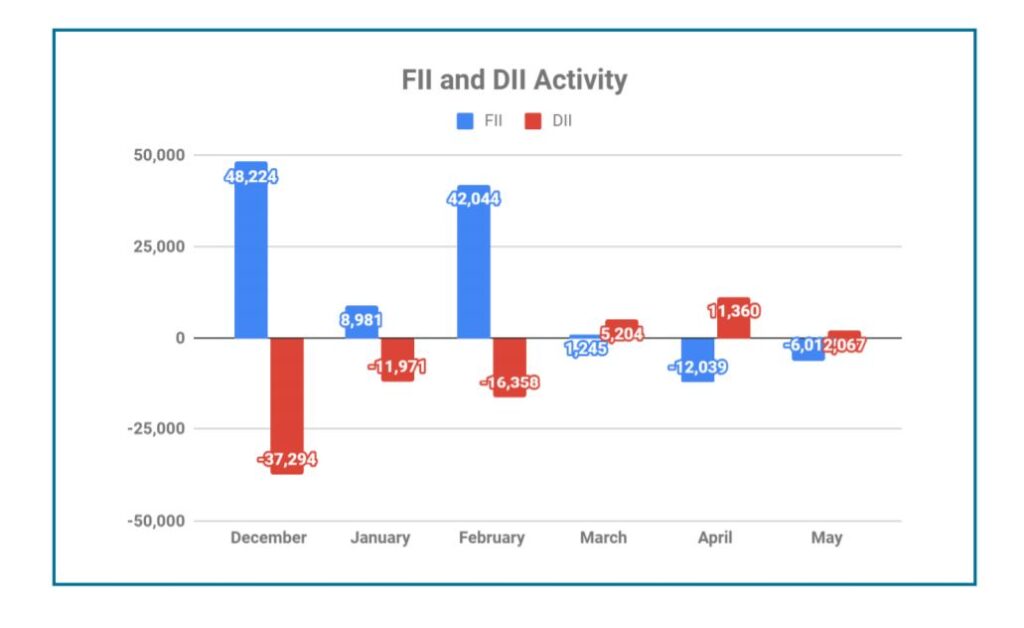 This sectoral index started showing negativity from the second half of February and extended its falling momentum in  the subsequent months. However, the recovery in the last month (May) turned its sentiment from bearish to bullish. In  the last month, the index has formed a bullish candle and closed at an all-time high on a monthly basis. Likewise, it has  given a breakout on the weekly chart after 10 weeks of a downtrend and gained substantially in the last two weeks of  May. Momentum indicator RSI on the monthly chart is still trending into the neutral zone and an analysis of the last three  years’ monthly RSI indicates this index may turn more bullish, once RSI crosses and holds above 64–65 levels. Simultaneously, the move in the last month helped this index to trend above all key moving averages and currently trending 7%  and 20% above its 50-DMA and 200-DMA, respectively.

The multi-timeframe analysis of Bank Nifty indicates this index has given a breakout on the monthly chart. However, the  weekly and daily charts are still showing some lackluster moves. Hence, we expect 36,000–36,200 is the key level to  watch in this index and any sustainable trading above this level may turn more bullish. In short, our bias is positive for  Bank Nifty and it may approach the 40,000-mark once it crosses and holds above 36,000–36,200.

The index was up by around 6% in the last month and is currently trending above all key moving averages on multi-time  frame charts. It has formed a bullish candle on the monthly chart but is still trending sideways on the weekly and daily  charts. Nifty IT is facing resistance around 27,500–27,600 levels on the weekly chart and our bias would turn positive  once it crosses and holds above these levels. The index may enter into uncharted territory in the upcoming weeks,  which will help it move towards the 30,000-mark.

The Nifty Pharma index moved upward by around 4.8% in the last month and 10% upward move in the month of April  as well. It formed consecutive bullish candles on monthly charts and is trending into a super-cycle bullish trend. Further,  this index is now trending into uncharted territory on the weekly chart with a positive sentiment and trending above all  key moving averages on the multi-timeframe charts.

Looking at the multi time frame charts, we expect this index must trade above 14,200 levels for a strong bullish trend  in the coming weeks and months. Our bias would remain positive above 14,200 mark and sustainable trading above  this level may lead it towards 17,000 levels in the upcoming months.

The index rose up to 5% in the last month after a correction of around 4% in April and formed a bullish candle on the  monthly chart. In the last month, it closed at an all-time high level on the monthly chart. Similarly, on the weekly chart,  this index is trading in between an upward-sloping “Wedge’’ pattern and the upward band of this pattern is placed at  35,800–36,000. Additionally, this sectoral index is trading above all its key moving averages and hence overall sentiment may remain positive in this space.

Nifty Metal gained around 14% in the last month and touched an all-time high at the 5,524 level. However, profit booking at a higher level slashed its monthly gain and the index closed with around 6.50% gain. Market action in the last  month formed a bullish candle along with upper shadow on the monthly chart. Further, it was trading sideways from  the weekly timeframe perspective after recording substantial gains in the first week of May. The index is in a strong  bullish trend and currently placed at 12.38% and 54.76% above its 50-DMA and 200-DMA, respectively.

The multi-timeframe charts indicate a strong bullish trend in this index and sustainable trading above the 5,300–5,400  mark may lead it to the 5,900–6,000 levels in the next few weeks and months. However, the index’s failure to cross the  5,300 level may turn it volatile and choppy. Hence, 5,300–5,400 is a key level to watch for in the upcoming months.

Nifty Auto has gained around 9% in the last month and formed a bullish candle on the monthly chart along with  improved momentum on RSI. Further, on the weekly chart, it had a breakout above the bullish continuation price pattern  along with improved momentum. Simultaneously, this index is trading above all its key moving averages on a  multi-timeframe chart and is currently trading 5.40% and 13.70% above its 50-DMA and 200-DMA, respectively. The  multi-timeframe analysis suggests a positive bias in this space and we expect this index might move upward toward  11,600–12,000 levels in the upcoming weeks and months.

Last month, this index retested its downward-sloping trendline from where it staged a breakout in February 2021. After  taking support around the trendline, that is around 300 levels, it gained 8.58% in the last month and formed a bullish  candle on the monthly chart. Similarly, it formed a bullish continuation pattern on the weekly chart with strong bullish  sentiment on the multi-timeframe charts.

An analysis of multi-timeframe charts suggests this sectoral index is ready to move into upward territory. We expect  sustainable trading above 350 in this index may lead it toward 430–450 levels (i.e. almost 30% upside) in the upcoming  weeks and months.

In the last month, this index gained strongly after two months of correction. Last month’s gain was backed by a strong  move in RIL. This sectoral index has formed a strong bullish candle and closed at an all-time high on the monthly chart.  It is also in a bullish trend on the weekly chart as the weekly price structure of this index is consistently forming higher  peaks and higher troughs along with bullish continuation pattern formations.

After considering various factors in this space, our bias would remain positive and we expect this index is ready to move  toward 21,200–21,600 levels in the upcoming weeks and months.