In July, the benchmark index Nifty50 traded sideways in the range 15,900–15,500 and formed a Doji candle on the monthly chart. The momentum indicator RSI was trading in an almost-flat zone and is currently placed around 73 level, along with MACD in a positive crossover. Further, on the monthly chart, it is trending in uncharted territory above all long-term key moving averages, with a positive bias.

On the weekly chart, in the second half of May, the index had given a breakout above the downward-sloping trend line after forming a bullish flag continuation and 12 weeks of consolidation. Afterwards, it gained 1,000 points and reached 15,900 in mid-June 2021 and once again entered into the consolidation zone of 15,450–15,950. The price structure on the weekly chart is bullish as it is consistently trending above all key moving averages. However, the leading momentum indicator RSI on the weekly time frame shows some sort of price-momentum divergence along with a flat MACD above the central line.

Likewise, after hitting an all-time high of 15,900, the index turned sideways and volatile on the daily chart. For the last 30 trading sessions, it has been trending in the sideways zone in the range 15,450–15,950. Further, it is trading above all key moving averages and currently holding above its 21-DMA. Further, it has formed a “hammer” candle as on July 28 after taking support around its 50-DMA. Apart from price action and moving averages, the leading technical indicator, the 14-day RSI, took support at around 54 levels and is currently trending in the bullish zone of 50–80 levels. However, MACD and the Directional Moving Index (DMI) on the daily chart are still showing sideways.

Further, as per the O’Neil Methodology of the market direction, the current market is in a “Confirmed Uptrend” with three distribution days in the last 25 trading sessions.


All the above-mentioned multi-timeframe technical parameters, along with derivatives data and O’Neil Methodology of market direction, suggest a bullish trend along with positive bias. We expect sustainable trading above 15,900–15,950 may lead this index toward 16,500–16,600 levels in the next few weeks.

Indian Sectoral Coverage (As on August 2, 2021) – As per O’Neil Methodology 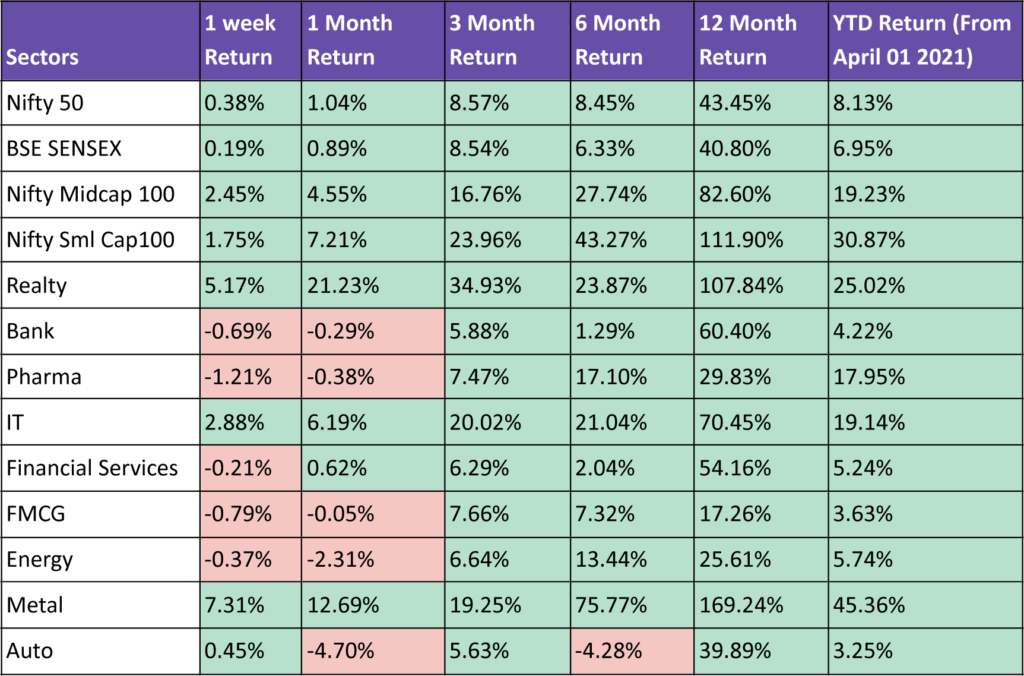 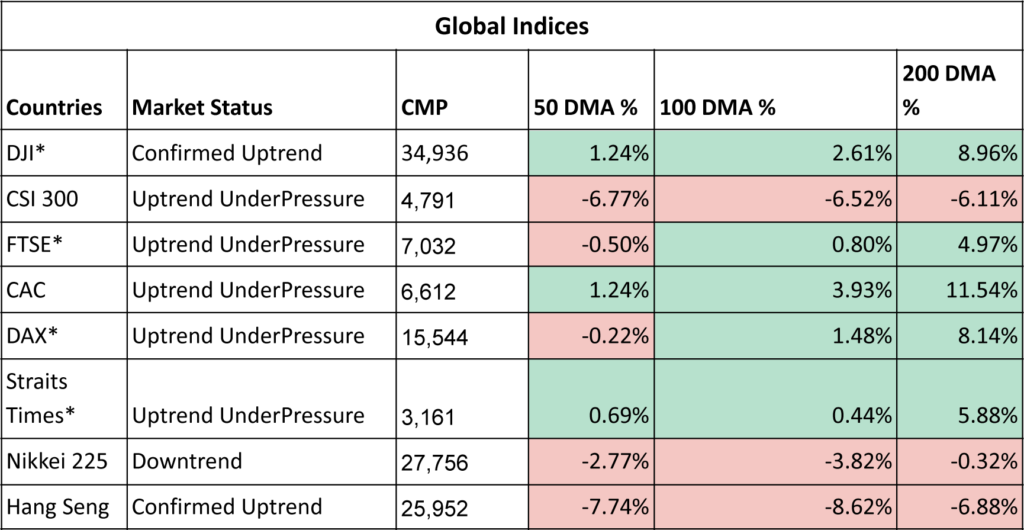 July was another month when this major sectoral index traded sideways with a negative bias in the range 34,000–36,000 and underperformed the Nifty50. It has formed a bearish candle with an upper shadow, but maintained a higher-high and higher-low price structure on the monthly chart. Analysis of the last eight weeks’ price actions indicates this key sectoral index did nothing and traded sideways as well as underperformed the market. Momentum indicator RSI on the monthly chart is still trending into the neutral zone with a positive crossover on MACD. However, weekly MACD is still trending with a negative crossover above the central line.

In the last month, the index failed to cross our expected level of 11,000 and formed a bearish candle on the monthly chart with a lower-high, lower-low price formation. Similarly, it reversed from around 10,800 level and formed a lower top price structure on the weekly chart. Further, it breached its 50-DMA and accelerated downside toward the 10,000 mark. The monthly RSI was trading sideways; however, the weekly RSI was trending in a negative slope along with a negative crossover on MACD. This sectoral index has underperformed the benchmark index for the last seven weeks and traded with a negative bias.

From now onwards, fresh bull calls can only be taken if the index manages to cross and hold above 10,800 level. However, on the downside it may turn more negative, below the recent low of 10,000–9,950 and trading below these levels may open a fresh downside window in the upcoming weeks. Hence, we expect this sector may remain traded volatile in the 10,800–9,700 levels in the upcoming weeks.

This sectoral index moved per our expectations and gained around 10.63% in July. It has formed a bullish candle on monthly chart and is still trending with bullish momentum in all time frame charts. After the consolidation of the last 10 weeks (i.e., trading in the range 4,900–5,400), the index regained strength in the last week of July, after receiving positive cues from China about its export tariffs. The multi-timeframe analysis suggests the metal index is in bullish momentum and might move further from its current level. Our bias would remain positive and we expect this sectoral index still has room for an upside move toward 6,000–6,100 levels in the next few weeks.

In the previous monthly report, we mentioned “the index will slowly and gradually move toward 30,000–30,500 levels in the next few weeks'; the index has met this expectation and moved as predicted. Nifty IT gained around 4.5% in July and is currently trending above its all key moving averages in all timeframe charts. Apart from the price structure, technical indicators like RSI, MACD, and DMI/ADX are trending in a bullish zone with positive bias on multi-time frame charts like in the previous month.

Our bias would remain positive on this sectoral index and we expect it to move further from the current level. However, we advise our traders to remain cautious as some profit booking cannot be denied at a higher level. However, the overall structure is bullish and hence one can remain invested in this space. Further, midcap IT stocks did phenomenally well and we expect further outperformance in the upcoming weeks.

Last month, Nifty Pharma traded volatile, making a “long-legged Doji” formation. Further, on the weekly chart, this index has been trading sideways for the last four weeks and facing resistance at around 14,700 levels. Currently, the index is trading above its all key moving averages. However, in the last week of July, the index traded volatile after Dr. Reddy’s posted weak Q1 earnings. The numbers dented sentiment and the index breached below its 50-DMA in one go. 5 However, Sun Pharma’s earnings results lifted sentiment and helped the index to close marginally above its 21- and 50-DMA.

Our bias would remain sideways in this space until this index trades below 14,700. Trading above 14,700 may open a fresh upside window. However, our bias would be negated below the 14,000 level.

Last month, the FMCG index closed on a flat note and formed a “Doji” candle with an upper wick. Further, on the weekly chart, this sector has been trading in a narrow zone since the last six weeks. The index is marginally trading above its 50-DMA and 6.65% above its 200-DMA. However, in the last week of July, it formed a “bearish engulfing” candle and reversed from its 50-DMA after taking support around that level.

The Realty index has outperformed the entire Indian sectoral index basket and gained around 15.90% last month. It moved as per our expectation and closed near 400 levels. Last month, this index formed a large bullish candle with a higher-high, higher-low price formation on the monthly chart. Further, on the weekly chart, it broke out from a small trendline connecting the high of March 2021 to June 2021, along with RSI and positive MACD crossover. Currently, the index is trending above all key moving averages on all timeframe charts, indicating a bullish trend.

The multi-timeframe analysis indicates this index is poised for a fresh upside move, and may touch 440–460 levels in the coming month.

This sectoral index moved as per our expectations and touched a low of 18,800 levels. Last month, this sectoral index traded with a negative bias in the range of 18,800–19,900. On the monthly chart, it formed a bearish candle pattern. Further, on the weekly chart, the index closed below the upward sloping parallel channel connecting the low of October 2020 to April 2021. Momentum indicator RSI is trending in a negative slope with a negative MACD crossover. Currently, this index is trading below its 50-DMA and 100-DMA however, 4.5% above its 200-DMA.

Our bias would remain negative to sideways in this space until this index trades below its 50-DMA. However, a bounce back cannot be denied from the current levels. We expect the index may remain traded in the range 20,000–19,000 in the next few weeks. 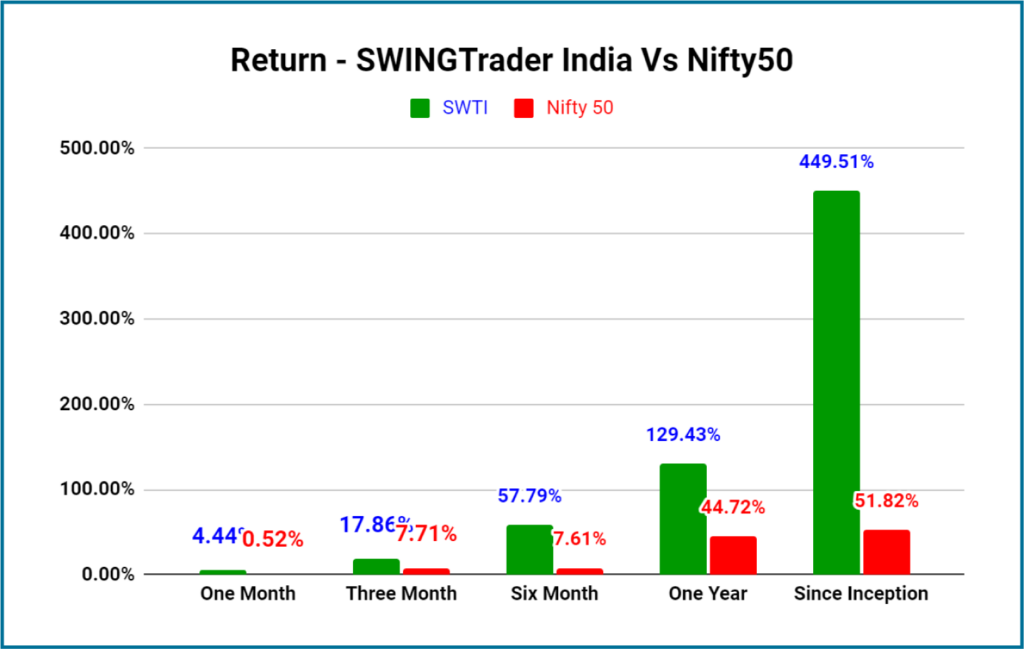 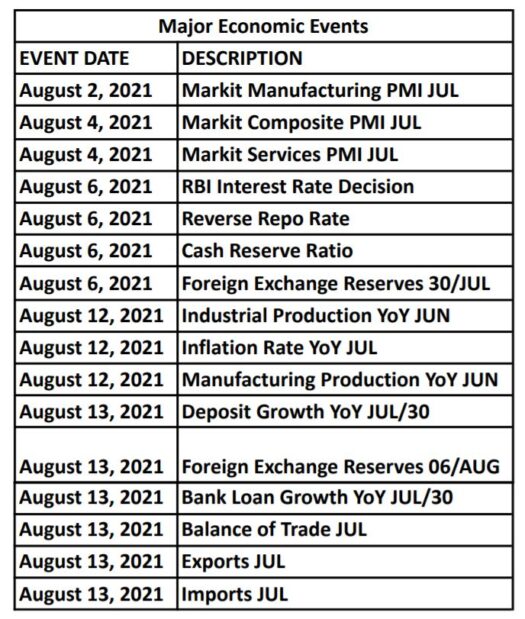