Last month, the index traded in a range-bound zone, almost in line with our expectations as published in our previous monthly and weekly reports.

In April, the index failed to chase its previous two month’s high and turned volatile in the range of 15,044–14,151. The market action in the month formed a Doji candle, with a lower-high and lower-low price formation, and the index settled with a nominal loss of 0.40%. The momentum indicator RSI on the monthly chart was almost flat, and it was hovering around 69–67 levels for the last two months, with a neutral bias from a long-term perspective. Likewise, other technical indicators also suggest a neutral bias from a long-term perspective.

On the weekly chart, the index is trading along an upward sloping trendline from the recent multi-year low and trending above all key moving averages. Also, a detailed analysis of the weekly chart indicates the index is volatile and choppy for the last ten weeks, and it has formed multiple DOJI candles in a row on the weekly chart. The weekly RSI is now trending in a negative slope, with a lower trough and peak, and has now breached the trendline connecting the high of August 2018 and January 2020. Additionally, RSI is also now trending below this trendline, indicating a  negative bias. Another trend following indicator, MACD, is trending in a negative slope with a negative crossover. However, weekly MACD is still trending in the positive zone.

Likewise, the index has been trading in a downward sloping parallel trendline on the daily chart and is currently trending below its 21- and 50-DMA. An analysis of the daily price action over the last three months indicates the index has formed multiple bearish candlestick patterns on every upward bounce, and every upward bounce has sold off. Though in the last week of April, the index tried to cross its downward sloping trendline but failed to hold above 14,900. And the index once again approached the 100-DMA, which is currently placed around 14,486. Hence, we expect the index to turn more negative, and a fresh downside window may open toward 13,700–13,600 levels once the index decisively breaches these levels.

Further, as per the O’Neil Methodology of the market direction, the current market is in an “Confirmed Uptrend” with two distribution days in the last 25 trading sessions.

All the above-mentioned multi-timeframe technical parameters, along with derivatives data and O’Neil Methodology of market direction, suggest a sideways kind of move in the coming month with negative bias. The last three month's price action suggests the index is facing strong resistance around 14,900–15,000. Likewise, on the downside, it has support around 14,200–14,100.

Also, the index is still trending in the sideways zone with a negative bias, but the study of various technical indicators, along with market psychology, indicates bulls are losing their grips, and a fall below the 100-DMA may open a fresh downside window toward 14,000 and 13,700–13,600. In short, our bias would remain negative for the current ongoing month until the index is trending below 14,800–14,900. However, it may turn bullish if the index will cross and hold above 14,800- 14,900. 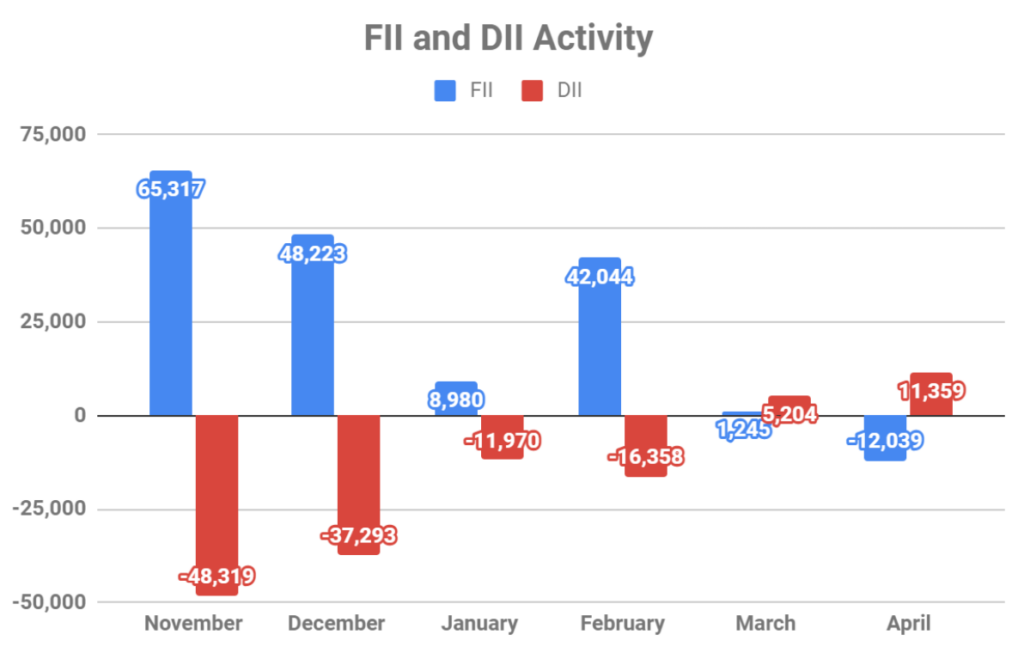 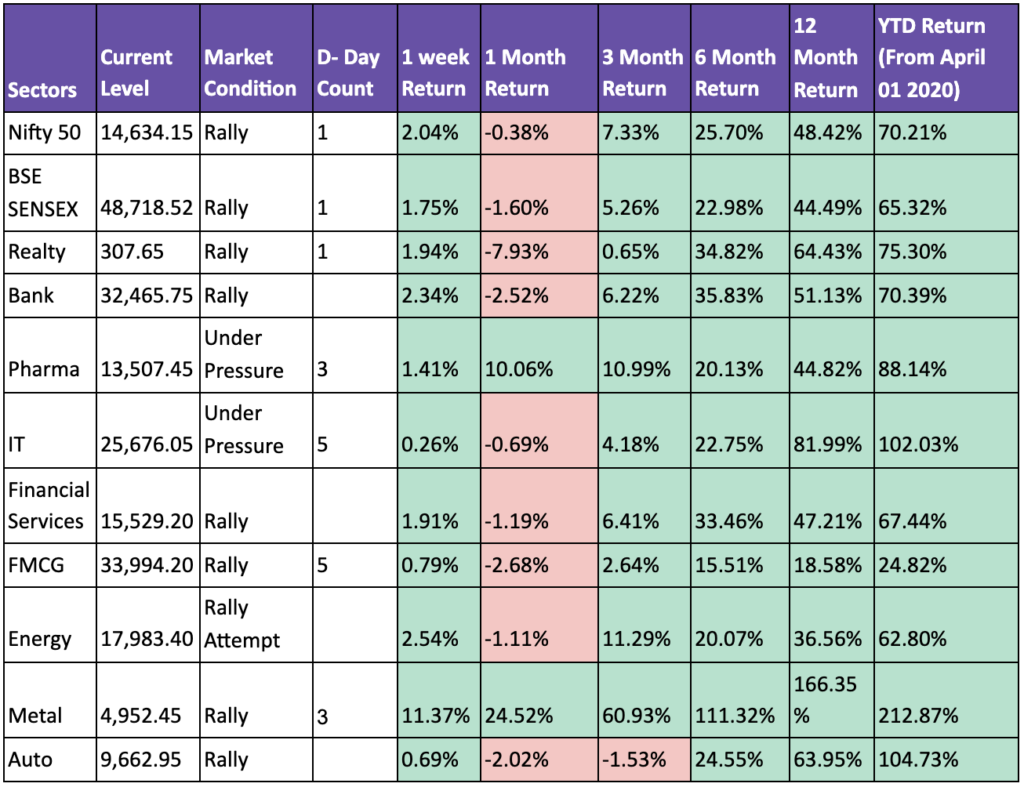 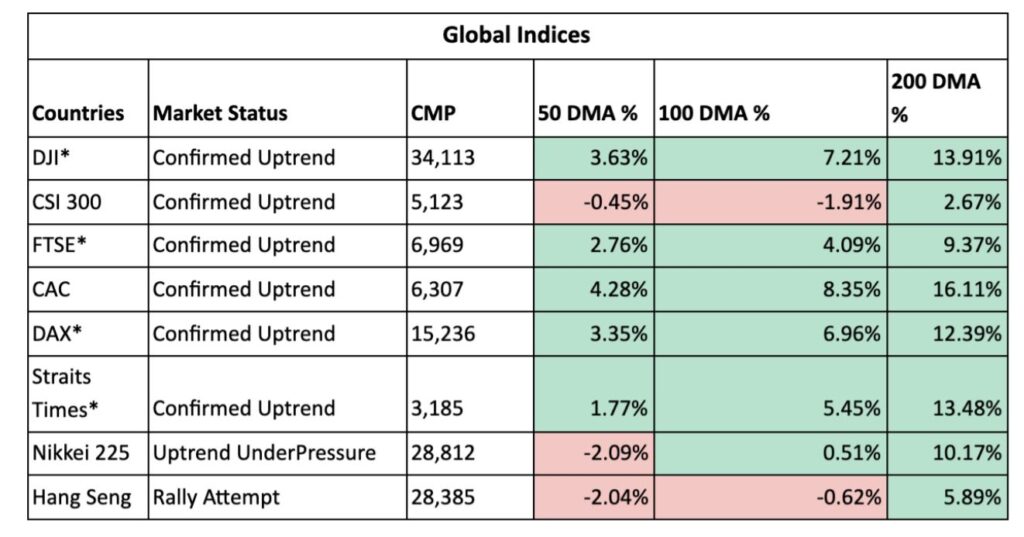 This sectoral index started showing negativity from the second half of February and extended its falling momentum in the subsequent months. It lost 1.56% last month and formed a bearish candle, with a lower-high and lower-low price formation. Last month, this space was more volatile than Nifty50 and underperformed the overall market. Momentum indicator RSI on the monthly chart accelerated in a negative slope and is currently placed below 60 levels. Further analysis of the price action from January 2018 in conjunction with RSI on the monthly chart indicates RSI must cross and hold above 65–66 levels for a strong bullish trend in this space. And from a price analysis point of view, the index must hold above 32,400–32,600, which was previously the all-time pivot level. Apart from monthly charts, weekly and daily charts of Bank Nifty are already showing sideways trends with a negativity bias as it has already started trending below the 50-DMA with five distribution days.

The Nifty Pharma index moved as per our expectations and rose toward 13,500 as mentioned in the last monthly report. Currently, Nifty Pharma is trending in bullish territory and trending above all its key moving averages on all time frame charts. The index has ended in positive territory for the last seven consecutive weeks and is trending upward on the weekly chart. Even on the monthly chart, the index has made a big bullish candle with the formation of a higher-top and higher-bottom price structure. The momentum indicator RSI is well-placed in the bullish zone and indicates bullish structure on higher time frame charts. Another indicator MACD is showing positive indication with a positive crossover. From now onwards, we expect our bias to remain positive in this space until the index is holding above 13,500. Further, in our opinion, this index may move towards the 17,000 mark in the next few months.

The index started correcting after hitting its recent all-time high of 35,422 in the first week of April. The market action in the last month formed a bearish candle. Likewise, an analysis of weekly charts during the last five months showed a sideways trend as the index formed a double-top price structure, coupled with RSI divergence and MACD negative crossover. Also, the momentum indicator RSI formed a double-top on the monthly chart, indicating a sideways trend. Likewise, on the daily chart, there is a negative crossover of its 50- and 100-DMA, which again suggests some negativity until the index holding below its 50- and 100-DMA. After considering the above factors, we expect a sideways kind of move in the range of 35,000–31,500 in the coming weeks. From the coming month’s point of view, we expect this index to turn more volatile below 33,400–34,500 levels.

After touching its recent multi-year high of 11,093 on February 9, the index has corrected around 15% and touched the low at 9,345 on April 12. After breaching its 100-DMA with a gap down on April 12, the index has been trying to consolidate for a while and is struggling to move forward. Looking at the current situation and following an analysis of the multi-timeframe chart of this particular index, our bias would remain negative in the next few weeks. We expect this index to retest its 200-DMA in the next few weeks and months, which is 6.8% down from the current level, which is placed around 9,000. From May month’s perspective, our bias would remain negative for this particular sector.

This sectoral index moved as per our expectations and touched a high of 25,500 levels, however, profit-booking at higher levels pushed the index down, and it closed with a loss of 0.68% m/m. As a result, it formed an “inverted hammer” candlestick pattern on the monthly chart. Likewise, on the weekly chart, it has formed a spinning-top-like bearish candle formation and is subsequently exhibiting a sideways trend with a negative bias. Also, it has breached the 50-DMA on the daily chart. The multi-timeframe analysis indicates this index may trade sideways with a negative bias in the range of 24,000–27,500 in the next few weeks.

As we had mentioned in our last monthly report published on April 6, the metal index continued to show great strength and formed a bullish candle, with a higher-high and higher-low price formation last month. Currently, the index is trending above all its key moving averages with bullish momentum. Technical indicators, RSI and MACD, are trending in an upward slope with a positive crossover on both monthly and weekly charts. The index is currently trending 19.77% above its 50-DMA and 59.69% above its 200-DMA, and our current bias is positive for metals. Over the last few months, the index has gained substantially, but there is no sign of negativity. Though, some profit-booking cannot be denied at current levels. But current trends in this space suggest it may gain further from these levels and may test 5,300 levels in the coming month. Hence we advise our subscribers to follow a cautious approach while taking trades in this space.

This sectoral index moved as per our expectations and fell toward 17,150 levels. However, it bounced back sharply from lower levels and ended with a nominal loss of 0.85% last month. The price action on the monthly chart has formed a “hammer” candle pattern. Likewise, it was negative on the weekly chart but turned positive after a gap-up opening in the last week of April. The technical indicator RSI on the monthly chart was trending flat, and on the weekly chart, it was trending in a negative slope. Though, the recovery that took place in the last week of April turned the sentiment in this space. The detailed analysis of this index and stock components of this index indicates that some positive moves may happen in the coming weeks. From now onwards, our bias would remain positive until the index is holding above 17,500. We expect this index may move towards 18,800–18,900 levels in the next few weeks, and trade above these levels may lead it toward 19,400–19,500.

The Realty index also moved as per our expectations and touched a low of 298 levels. On the monthly chart, it formed a bearish candle, with a lower-high lower-low price formation. Further, it retested the downward sloping trendline connecting the high of January 2018 to February 2020, and it is currently hovering around that range, i.e., around 300 level. It has also breached its 100-DMA and is now trading between its 100- and 200-DMA with a negative bias. The multi-timeframe price chart, along with technical indicators, indicates some bounce back cannot be denied from the current levels. However, overall sentiment in this space is still showing negative trends, hence, sustainable trading below 300 may open a fresh downside window toward 285 and 270– 265.

Key Highlights from RBI Governor’s Speech On May 05th 2021
India Fights Back with a Slew of Measures; Conducts a Large Vaccination Program