Fiscal Math
The Union Budget FY22 bet for an investment-led growth. The fiscal deficit is estimated higher at 6.8% in FY22BE. This current year (FY21) expense was also revised higher to Rs 13.9T from Rs 13.1T in FY21BE. To fund the deficit, the government has to borrow an additional Rs 800B by March 2021

From where money comes and goes?

The government has estimated Rs 1,75,000 crore as receipts from divestment in FY21-22. It has planned to complete the strategic disinvestment of BPCL, Air India, Shipping Corporation of India, Container Corporation of India, IDBI Bank, BEML, Pawan Hans, Neelachal Ispat Nigam Limited, etc. Also, privatisation of two PSUs and one general insurance company is also on cards to be completed in FY21-22. There is also a proposal of a special purpose vehicle to take up divestment of public sector companies. It has also planned for an IPO of LIC in FY22. In addition, Niti Aayog will look for various CPSEs where strategic disinvestment will be done. Auto

The Budget 2021 provides multiple growth drivers for the Auto sector. An infra focus budget will help CV growth. In addition, focus on city bus transport and most importantly announcing the scrappage policy for old vehicles will boost the sector as a whole.

Reduced custom duty on steel can help lower input costs. CV manufacturers will benefit the most as they have the highest dependency on steel. Import duty on specific auto components increased to 15% from 7.5–10%.

This move will provide a boost to domestic players. The common beneficiaries from scrappage policy, infra push, and increase in city buses are Tata Motors, Ashok Leyland, and Eicher Motors.

Reduction in customs duty on gold to 7.5% from 12.5% earlier is positive for jewelry companies. No additional tax on cigarette can be positive for tobacco companies. However, input cost for manufacturers of personal care and bakery products will increase due to a hike in customs duty on crude palm oil. The budget has no direct action to boost private consumption as no taxes were lowered. Also, rural employment schemes were not awarded incremental fund. However, infra push will generate high employment, which will help boost demand for consumer goods.

Pradhan Mantri Ujjwala Yojana is extended to cover 1 crore more beneficiaries. At the same time, city gas distribution network will be expanded to 100 additional districts over the next three years, which is a positive for companies like IGL, MGL, and Gujarat Gas.

The government proposed an Agriculture Infrastructure and Development Cess (AIDC) of Rs 2.5 and Rs 4.0 per litre on petrol and diesel, respectively. At the same time, some additional duty on petrol and diesel will be reduced. So, the final selling price will not be impacted due to AIDC as of now. Also, the government allocated Rs 14,073 crore for petroleum-related subsidies.

A steep increase in capital expenditure will be a strong tailwind for the cement sector. BE FY22 capex for the Ministry of Road Transport and Highways was at Rs 1.08T, up ~18% y/y. The centre plans to award national highway projects of 8,500 kilometers by March 2022 and complete an additional 11,000 kilometers of National Highway Corridor. The increased spend on Metro projects will boost growth. Affordable housing projects can avail a tax holiday till the end of FY22. This will boost housing projects and enhance cement demand. 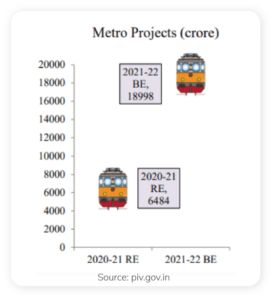 The healthcare sector attracted incremental allocation of Rs 2.23 lakh crore in FY22 with the provision of Rs 35,000 crore for COVID-19. Of this, healthcare-related measures contributed Rs 95,452 crore, which is 72% of the total budget expenditure. Jal Shakti Abhiyan accounts for the majority of the remaining expenditure on well-being. Under the Ministry of Jal Shakti, drinking water and sanitation has witnessed an increase in spending of 3.5x on well-being as against RE fiscal 2021.

BE of fiscal 2022 is up 47% as compared with fiscal 2021, driven by the Rs 35,000 crore allocation for COVID-19 vaccination and financial grant of Rs 13,192 crore to be stated for health-related expenditure. The entire spending of Rs 25,000 crore on vaccine procurement should immunize almost 50% of the population. Per the data released by the Ministry of Health and Family Welfare, about 41.4 lakh people have been vaccinated as of February 2. 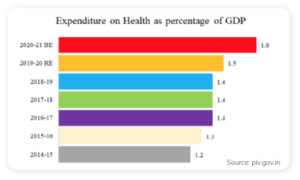 MGNREGA accounts for 34% of rural income. Thus, a 19% increase in allocation over BE fiscal 2021 is a big plus for the rural economy. There has been a decline in import duty on crude palm oil to 15.0% from 27.5%. However, agri cess increased to 17.5%, effectively resulting in a 5% increase in net import duty. This should calibrate imports of refined palm oil, which can be a negative for domestic edible refiners.

The government has announced that it would set up about 10,000 new FPOs in this budget. Further, RIDF has attracted a 34% increase in allocation, which should boost structural development, especially in rural bridges, rural roads, irrigation, and rural roads. The expenditure on distribution of food grains under the Public Distribution System (PDS) advanced 3.6x this fiscal over BE fiscal 2021 amid the pandemic. 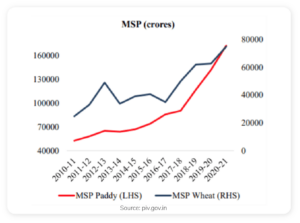 The government has extended the tax benefit for buyers (Rs 1,50,000 under Section 80EEA) and developers (80-IBA) of affordable houses (up to a ticket size of Rs 45 lakh) for an additional one year. The allocation for PMAY Urban stood at Rs 21,000 crore (RE) in fiscal 2021, which was up 2.6x against BE. The government has estimated spending of Rs 0.9 lakh crore till March 2021. Further, with a focus on the completion of 11M houses, the government is expected to spend additional Rs 0.87 lakh crore over the next two years.

This budget witnessed a 34.5% increase in allocation for capital expenditure to Rs 5.54 lakh crore. Higher allocation for capital expenditure is likely to boost the demand for metal in FY22. Further, anti-dumping duty (ADD) on the import of certain steel products has been revoked temporarily. Also, customs duty on flat, long, and semi-finished steel curtailed to 7.5%. The landed scrap cost for electric-arc/induction players is expected to decline 2.5% with an exemption of customs duty on imports, which in turn should expand their spreads.

An asset reconstruction company (ARC) and an asset management company (AMC) would be set up. This move will consolidate the existing debt and manage and dispose of stressed assets to alternative investment funds. Since the bad loans will be transferred to a single entity, the realization would increase and the burden of the banks will decrease. The banks and financial institutions that had turned risk-averse now might come forward with fresh lending, which will have a multiplier effect on growth. Privatization of two PSBs, other than IDBI Bank, and a general insurance company in FY22. FDI limit in insurance companies to increase from 49% to 74%. This will reduce the recapitalization burden on the government. This will also ensure competitiveness within the banking and insurance sectors. Public sector banks to get Rs 20,000 crore in FY22 for recapitalization.

The budget outlay for the power sector is estimated at Rs 61,555 crore for FY22. It is 21% higher than FY21BE and 22% higher than FY21RE. The increased expenditure by central power generating companies is for coal-based capacity addition of 2GW–2.5GW in FY22 and several hydroelectric power projects in Himachal Pradesh and Jammu & Kashmir.

However, this is expected to become competitive and efficient with the entry of multiple distributors in a single area. This will strengthen distribution and improve the quality of service to customers.

The budget has allocated Rs 1.1T to the railways. Of which Rs 1.07T will be utilized as capital expenditure to expand railway infrastructure in the country. Because of a one-time special loan to support the sector, the gross budgetary support is revised 55% higher than budgeted. However, excluding this, the spending would have contracted 59%.