In auction, some cricketers became multi-millionaires, others scratched their heads wondering why they went unsold. It is important to understand that the amounts earned by players did not emerge out of a fair price. This was demand driven scarcity-induced pricing. Few foreign players got record breaking amounts. This was mainly due to more than one team having their purse filled with crores wanting them in their squad. Similar things happen in the market. When many big institutional investors like the fundamental and growth story of a stock, they keep accumulating it and price keeps increasing along with the demand. Also, in IPL, many young uncapped Indian players benefited from being on the right side of the supply-demand situation. The I for Indian players in the IPL is an important factor. Similarly, I for institution in CANSLIM is also important. This I factor is most crucial for S, that is supply and demand.

These are the handful of players which have attracted high bid value in the auction among the 292 players which came under the hammer. These players are high in demand in the auction because of the quality they have shown through their performance which is reflected in their batting average, strike rate, number of 100s/50s, number of wickets, among others. Since quality players are limited in the kitty, their demand is  high which has enabled them to get sold at such whoffing valuation.

Similarly, in the stock market, The dynamic between supply and demand plays the critical role in determining the price of the stock. The price of a stock is set based on the give and takes between supply and demand. If a company shows strong fundamental and technical characteristics,  demand for its stock might scale up, and as the price increases, the balance between buyers and sellers is changed.  Buyers start to accumulate the stock by paying premium the current price of the stocks. When there are more buyers than there are sellers, this creates more demand than supply, so the price begins to rise. In our O’Neil Methodology, we capture the supply-demand dynamics through the S-factor of CANSLIM.

S- Factor (Supply & Demand)
The strong S-factor indicates heavy-volume accumulation (buying) by institutional investors, particularly at key moments like when the stock is forming and breaking out of a chart pattern

Why It's Important
The law of supply and demand is on display every day in the stock market. Strong demand for a limited supply of available shares will push a stock's price up. And an oversupply of shares and weak demand will cause the price to sag. So how do you measure demand in a stock? Start by checking the average daily trading volume. Look for days where the number of shares traded is much higher (or lower) than normal.

If the share price rises sharply and the trading volume spikes well above average, that indicates demand. It means mutual fund managers and other institutional investors — who account for the bulk of all trading in the stock market — are aggressively buying shares. And it's that strong institutional demand that fuels a stock's big price move. A quick way to keep track of the end results of professional trading is the Marketsmith Accumulation/Distribution Rating, which is based on daily price and volume changes. It tells you if your stock is under accumulation (professional buying) or distribution (professional selling).

Accumulation/Distribution Rating
Accumulation/Distribution Rating indicates that there is strong professional buying of a stock. Professional investors wield a huge amount of influence over stock's price. Thus it's essential that you buy the better stocks that professionals are buying and that you sell or avoid the ones they may be selling heavily. Stocks are rated on an A to E scale, with A being the best. 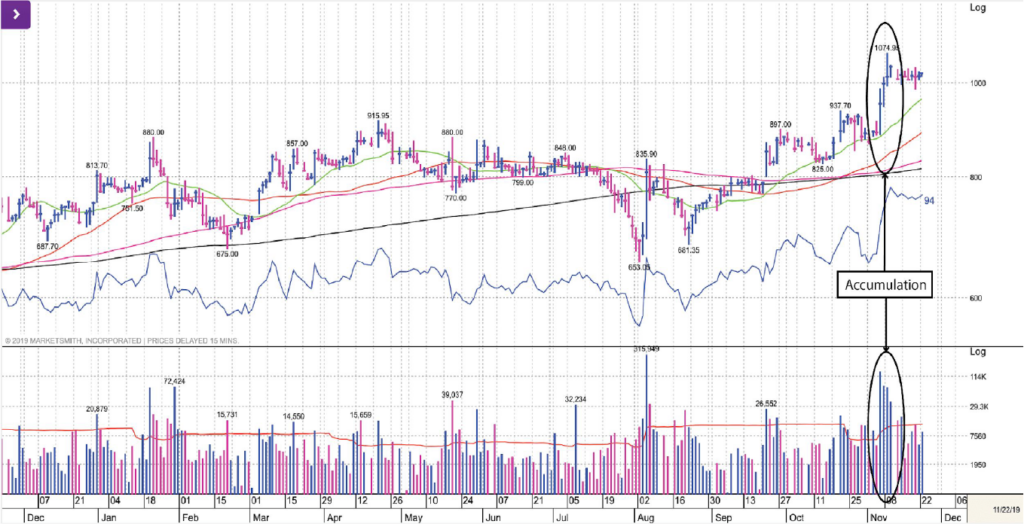 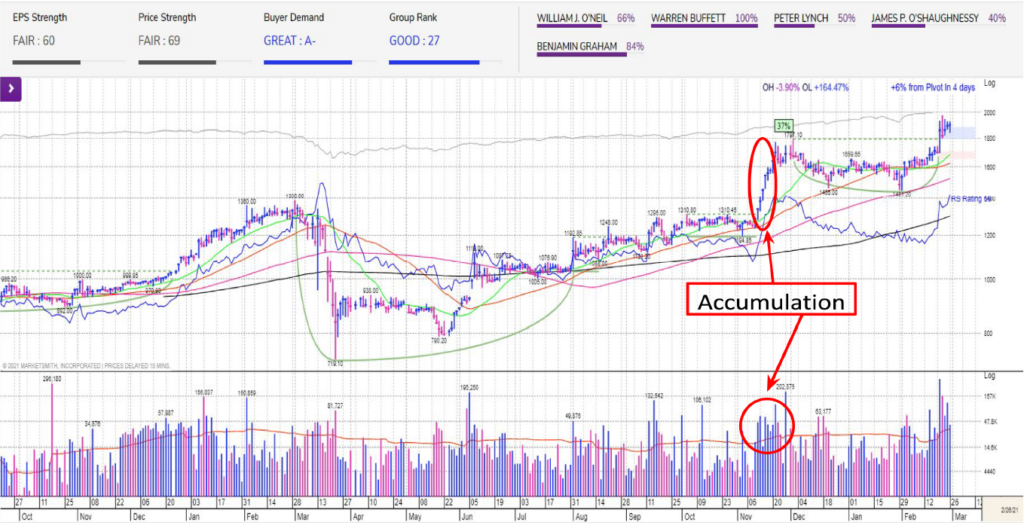 Disclaimer: This is for education purposes only and should not be construed as an buy/sell recommendation. Past performance never guarantees future results.
Read More