How to Spot a Bullish Base-on-Base Chart Pattern

With the stock market at new high this year, many stocks have formed base-on-base patterns. Keep an eye out for those, because they tend to be strong chart formations. The base-on-base is, of course, a combination of two bases. The stock forms a base but does not rise much in price from the buy point. That’s often because the general market comes under selling.

So, a new base starts taking shape at a higher elevation than the first. On a chart, the two patterns resemble the profile of two stair steps. Sometimes, the breakout from the second base will come after the selling pressure in the market has lifted.

Here are five characteristics to help identify the pattern:

To illustrate the characteristics, check chart of Carborundum Universal 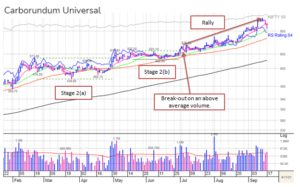