How Different Asset Classes Performed in 2020

How Different Asset Classes Performed in 2020

To just say 2020 has been an eventful year would be an understatement. Pandemic hit the world hard, pushing it into a pause mode. The economy came under pressure and investors were perplexed. The wild moves in the global equity market gave an adrenaline rush, while there was a lot of rush to safe-haven assets, pushing the gold price to 57K per 10 gram. On the other hand, bond yields trend downward globally as central banks have lowered borrowing costs for corporations and the government to increase spending.

During 2020, Gold price touched a peak level of Rs 57,000 per 10 grams in India. This dramatic soar in yellow metal prices to new record breaking levels is majorly driven by a combination of low interest rates, stimulus programs, a weak U.S. dollar, and of course a global pandemic, among others. Gold Futures prices surged to more than $2,000 per troy ounce in London in August, beating the record high of $1,920 an ounce registered in September 2011. 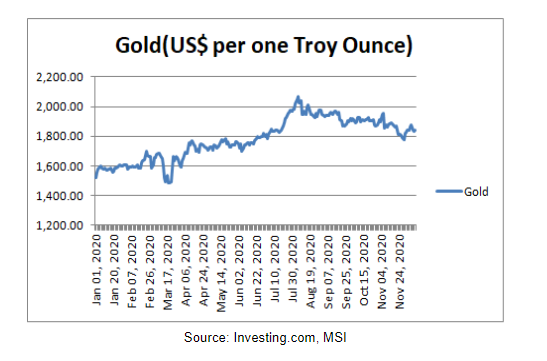 Bond yield acts as a leading economic indicator and the shape of yield curve indicates the health of economy and stages of economic position in the business cycle. The yield curve remains steep when short-term interest is kept low in light of economic downturns/distress. The low interest rate plays a key role to stimulate the economy, after which, growth starts picking up and eventually the yield curve is steepened with the rise of long-term rates. Similarly, when the economy cycle matures, short-term rates are high due to rate hike by institutional bodies, while long-term rates begin to rise more slowly or even decline. During 2020, bond yield remained under pressure as pandemic drove investors into safe assets. In the U.S., long-term interest rates have undergone a significant structural shift that is likely to keep yields at extremely low levels in the near future. Similarly, in India, Bond yield dropped below 6% in December from above 6.5% at the start of 2020. 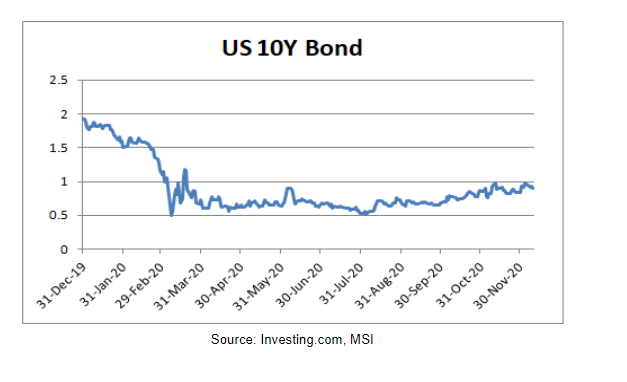 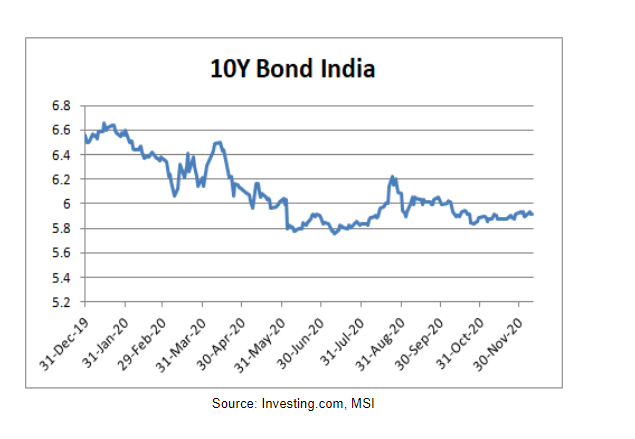 The world's best known cryptocurrency, Bitcoin, is hitting its highest levels in nearly three years. Bitcoin and blockchain technology have taken off as they gain more mainstream acceptance from exchange operators such as Chicago Mercantile Exchange (CME) and Chicago Board Options Exchange (CBOE), to Wall Street investment banks and mobile payment companies such as Square. Other cryptocurrencies are also trying to become viable alternatives to traditional, government-issued money. In October, PayPal said it would allow users to buy and sell cryptocurrency from their PayPal accounts. JPM Coin - a cryptocurrency that JPMorgan launched last year - is also now in commercial use. 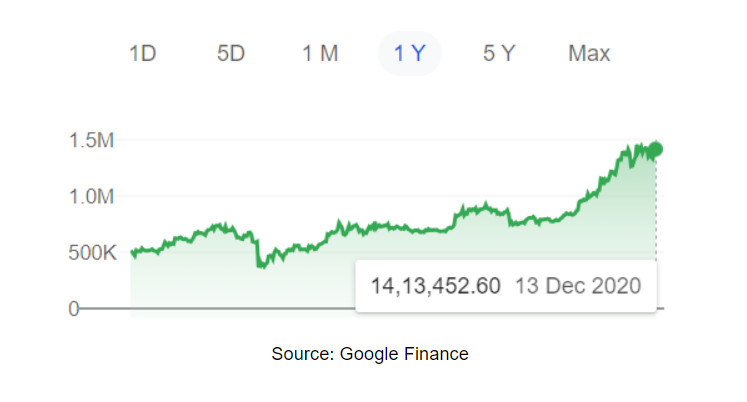 The US Dollar Index measures the value of the USD relative to a basket of six foreign currencies. Euro has the highest weight (~58%), followed by the Japanese yen (~14%) and pound sterling (~12%). The INR is not in this basket of currencies, but any change in the dollar index has an implication on its value. With the depreciation/appreciation of INR, fund flow in India’s equity market, profitability of companies in import and export business, dollar-denominated corporate debt, and commodities are all impacted. When the dollar index rises, the INR falls relative to the USD, and vice-versa. When the dollar index is falling, FII/FPIs get higher returns in terms of the dollar and vice-versa. Further, it has been observed that, historically, commodity prices have had an inverse relationship to the dollar index. Intuitively, the prices of gold move in the opposite direction to that of the dollar index. In 2020, the dollar index remained under pressure and traded downward, driven by liquidity provided by the Fed Reserve. As the supply of dollars increases, the prices go down. Further, the dollar index is expected to remain under pressure in the short term amid ongoing talks of the next round of stimulus in the U.S. 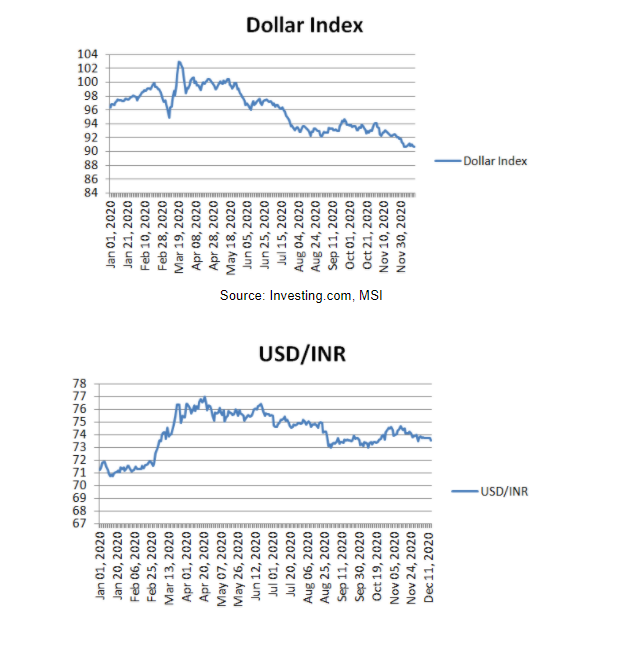 Equity markets globally had a deep cut due to pandemic. However, there was V-shaped recovery and most markets made a fresh high, taking its YTD returns more than 10%. Nifty recorded a new ATH of 12,430 on January 20. However, it succumbed to selling pressure at near highs and breached its 50-DMA and rebounded from its 200-DMA. The rebound was not strong as it breached its 200-DMA again by February-end. Using our methodology, we downgraded the market to a Downtrend at the start of March. We exited all our positions and saved portfolio from a record correction witnessed in March. After Nifty was able to sustain above its low of 7,511 for three consecutive sessions, we moved the market status to a Rally Attempt and then to a Rally after a follow-through day. Since April, the market was in a clear uptrend with a couple of minor profit booking corrections. On November 9, Nifty made a new all-time high for the first time after January. Currently, Nifty is trading at record levels and continuously making new highs. 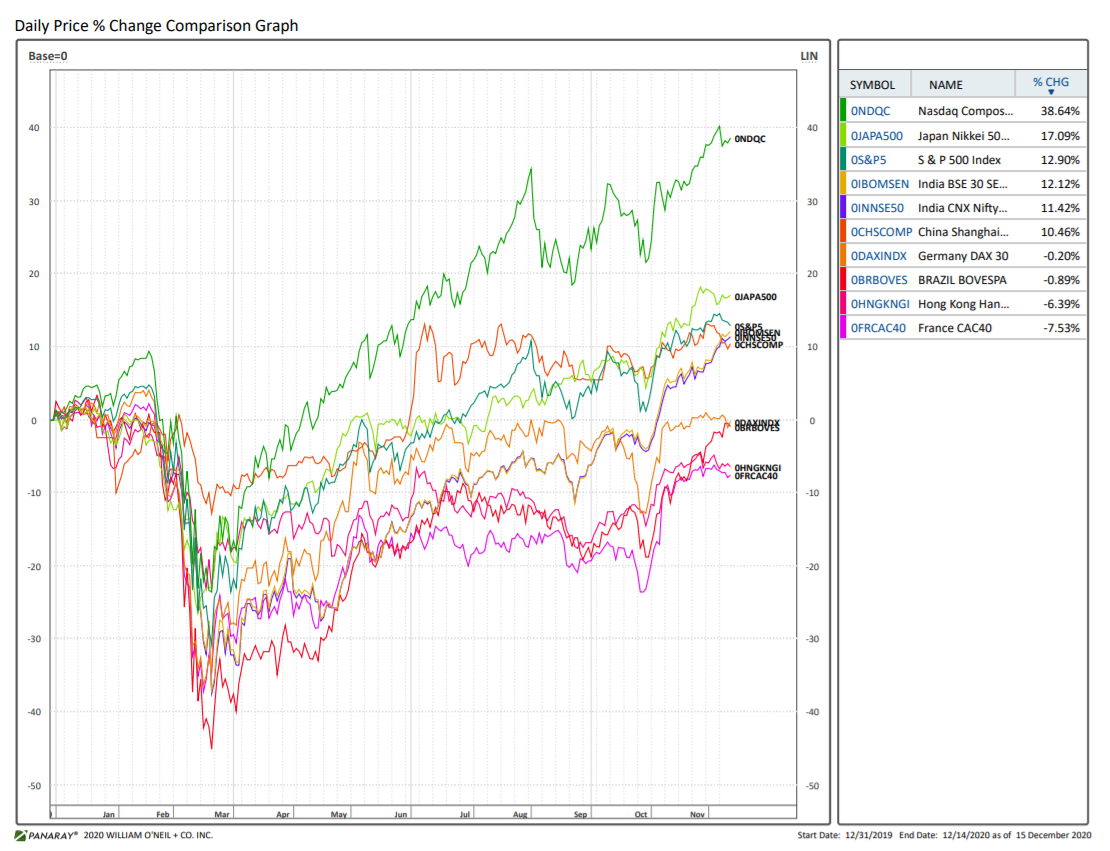 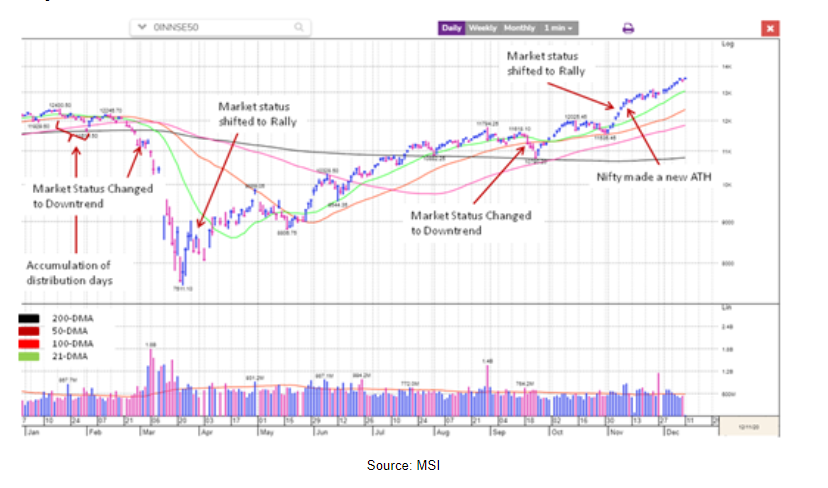 We maintain a positive view of the overall market as indices trend into new highs with low distribution day count. Further, leadership remains widespread across multiple sectors. We continue to recommend a selective approach to increasing risk. Focus on high-quality ideas emerging from sound bases with an RS line at or near a new high. After a strong rally, pullback/consolidation (if any) is a constructive sign if Nifty holds its short-term moving averages. On the flip side, tracking distribution days is crucial. Accumulation of distribution days can be a sign of market top and halt the uptrend.