FM Announces Relief Measures To Revive Economy
“Ladies and gentlemen, welcome aboard this service from Bengaluru to Mumbai. We are third in line awaiting  take-off and will be in the air in seven minutes. Please fasten your seatbelts and secure all baggage under your  seats or in the overhead bins. Enjoy your flight!”

Before COVID-19 grounded flights the world over, this announcement on domestic flights welcomed more  than one crore air passengers in India. The pandemic clipped the wings of the global aviation industry as stringent restrictions on travel ensured a near-total absence of flyers on any route, domestic or international.

In the pre-pandemic world, aviation had donned the growth hat. It was especially true of a country like India,  where talks abounded about the growing tourism industry, an expanding middle-income class, the increasing  preference for flights over trains, and several such tailwinds for the aviation industry.

With the lockdown and its accompanying global travel restrictions, benched staff, and rising ticketing liabilities,  aviation companies rapidly burnt cash. In the past, the industry had faced a few headwinds such as higher  crude oil prices and economic slumps, but no situation was ever so bad as to ground entire fleets and idle aviation companies, that too for more than a year.

Aviation Industry Faced Grim Scenario in the Backdrop of COVID-19

FY21 brought about the biggest setback the global aviation industry ever faced. Pandemic-induced lockdowns  plunged passenger demand by 94.3% in April 2020 versus April 2019, its lowest level ever. Between February  and April 2020, revenue-passenger kilometer (RPK) declined steadily/y by almost 99%. 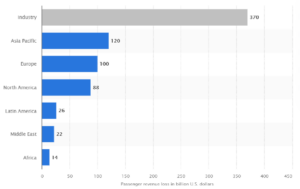 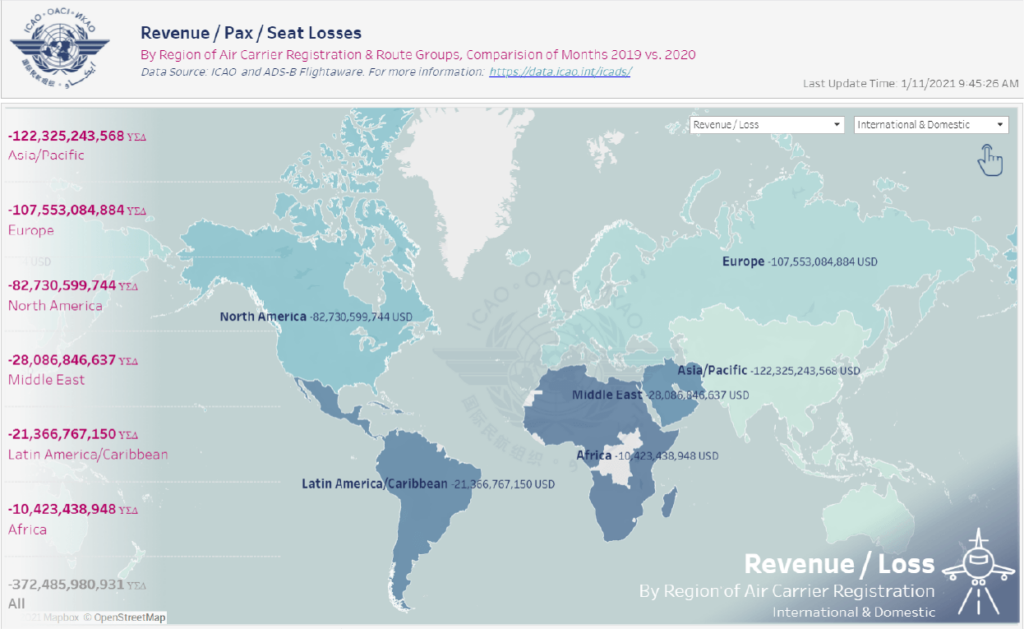 However, the Indian aviation industry again took a huge hit when the second wave of infections hit and many  states reinstated lockdowns and restrictions to curb the spread of the pandemic. Daily cash burn at airlines  jumped to Rs 19 crore in Q3 FY21, a figure likely to shoot up in the June quarter. Indigo, the leading player in  India’s aviation space, registered a 10% decline in its passenger numbers in March 2021 amid the second wave  of the pandemic.

PLFs of scheduled domestic airlines in May 2021 were as shown in the following chart. 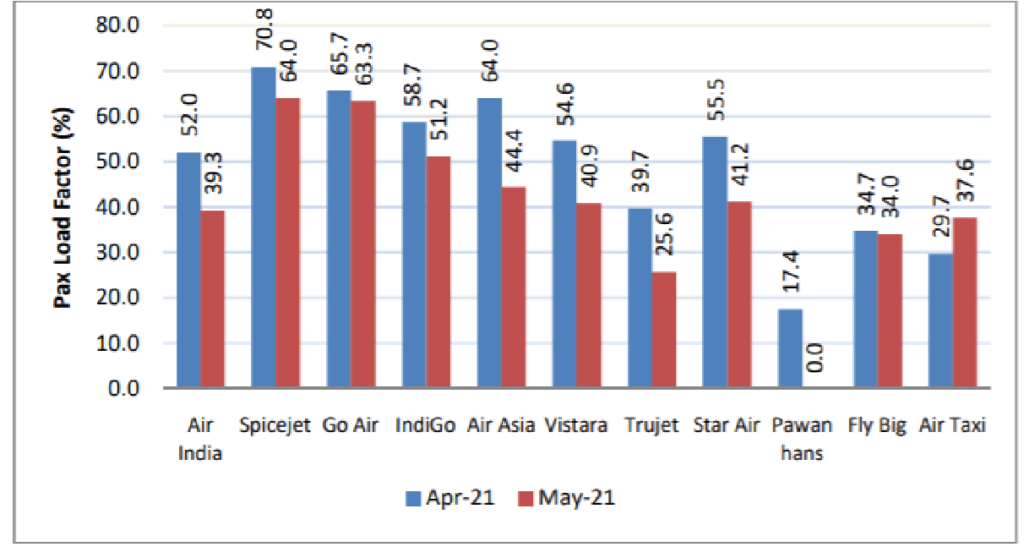 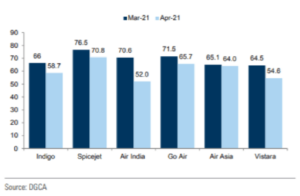 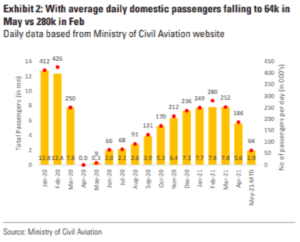 India’s OTA market as of FY20 was estimated at $16B. It is expected to nearly double to $31B by FY25,  expanding at a CAGR of 14% from FY20 levels. This phenomenal growth is to be driven by the increased adoption of internet platforms in underpenetrated segments such as hotels, international travel, and bus (online penetration rate <20% in each segment). Further, the rise in people’s income level would become a strong tailwind,  elevating the underlying demand in sectors such as airlines and hotels. Growth is further expected in the back drop of deeper penetration of travel and tourism in the country’s lower tier towns and cities. 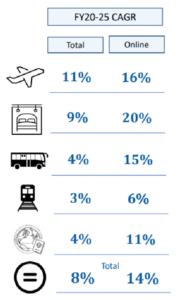 Per the International Air Transport Association (IATA), global air travel is expected to rebound strongly by 2023  as countries ramp up COVID-19 vaccinations. IATA estimates passenger numbers would recover to 52% of the  pre-pandemic levels by the end of this year, reach 88% next year, and surpass the pre-pandemic levels by 5%  in 2023.

On the domestic front, demand started improving gradually in the last week of May 2021 and continued into  mid-June. In fact, demand increased sharply in June amid the declining number of COVID-19 cases, indicating  improved passenger sentiment. Many industry players now expect passenger traffic to revert to the February  levels (when bookings surpassed 80% of pre-pandemic levels on certain days) by the end of this year. Travel  portals like Ease My Trip are dealing with a slew of inquiries and demand is clearly on the rise like it was after  the first wave subsided.

Besides airlines, railway traffic is also on an upswing. Union Railway Minister Piyush Goyal announced that 32  pairs of trains, including the Garib Rath Express Special, Taj Superfast Express, and Shane Punjab Special, will  resume operations in July, along with several other routes. This would definitely increase traffic on the Indian  Railway Catering & Tourism Corporation (IRCTC) website. On comparing the figures for the last two years, it is  evident IRCTC was only able to issue half the number of tickets it usually does. This was due to pandemic-related lockdowns in many states. However, on a positive note, online ticket booking has grown to 80% from 72%  in this period, and is expected to grow further.

The minimum fare for domestic flights was increased, effective June 01, 2021. The lower airfare band was  raised 13–15%, keeping the upper limit unchanged. This will be a positive factor for airlines as it will enable  them to cover some of the costs attributed to increased fuel prices. Also, airlines fall under the scope of ECLGS  3.0. They can access additional funding of up to 40% of their loan outstanding, or Rs. 200 crore, whichever is  lower, at attractive interest rates. Airlines can thus obtain liquidity to manage their working capital requirements. Further, in July, the civil aviation ministry allowed domestic airlines to operate at 65% of their pre-pan demicapacity, an increase from the 50% capacity allowed previously, as daily domestic air passengers numbered nearly 1,60,000 in the first week of July, up from 50,000 in May 2021.

Interglobe Aviation operates India’s largest passenger airline, IndiGo, which has a market share estimated at  53.9% as of April 2021. It operates in India’s domestic air travel market as a low-cost carrier and runs 1,500+  daily flights with a fleet of 285 aircraft and 91 destinations (67 domestic, 24 international). The company has  a code-share agreement with other airlines worldwide. It announced operations to seven new destinations in  Q4 FY21.

Revenue from operations decreased 25% y/y to INR 62,229M due to the second wave of the pandemic and  a surge in fuel prices. 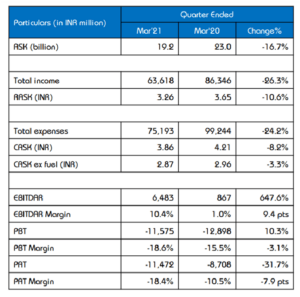 In Q3 FY21, the company operated around 70% of domestic capacity and only 28% of its international capacity  as many countries continued to impose travel restrictions. In Q4 FY21, Indigo hit a peak load factor of 85% on  certain days, especially in February 2021. However, a resurgence of COVID-19 cases in March 2021 slowed  down bookings. On the international front, Indigo operated air bubble flights to 10 cities with capacity raised to  36% compared with the capacity in December 2020. Also in Q4, average fuel prices and adverse forex effects  increased approximately 26% q/q. Daily cash burn increased 26.6% q/q and management expects this to  continue into the June quarter.

The stock has been trading sideways in the last six months in a range of INR 1,500–1,860. It formed a  base-on-base pattern and failed to break out from the stage-one cup pattern. However, it is currently trading  between its 21-DMA and 50-DMA. It has a poor RS Rating of 37. Ideally, we would want this rating to cross  70. Its EPS Rating is also poor at 13. Institutional sponsorship for the stock increased in the last quarter by  nearly 1%.

SpiceJet Limited is one of the leading low-cost airlines, providing scheduled flights between major cities in  India. The airline operates a fleet of Boeing 737 aircraft. E-booking and e-ticketing facilities are available online,  along with telephone booking. SpiceJet's maintenance support is handled by KLM, and technology is sourced  from Star Navigation, Russel Adams, and Tech Log. The company also runs a dedicated cargo service, SpiceX press, which is India’s largest cargo operating airline.

Two consecutive years of weak traffic and significant losses and increasing debt has impacted the financial  viability, especially the bottom line of the company.

Currently, the stock is trending above all its key moving averages after recently reclaiming its 200-DMA. As of  now, it has a poor EPS Rank of 20, poor price strength of 37, poor RS Rating of 37, and poor Group Rank of  145 but has good buyer demand of B+. The number of funds invested in the stock increased 4% and shares  held by these funds decreased 32.96% in the last quarter. 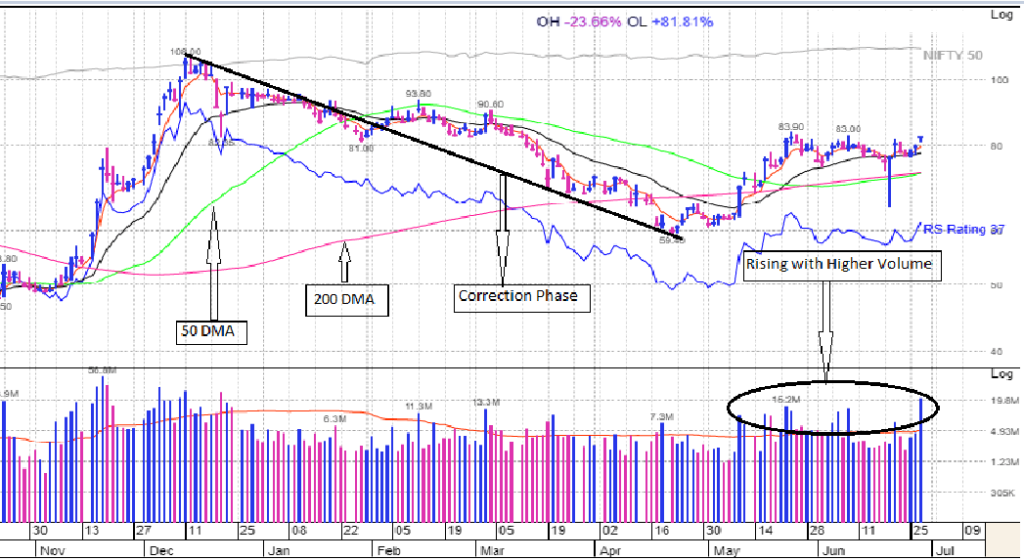 IRCTC is the only entity authorized by Indian Railways to provide online railway tickets, catering services to  railways, and packaged drinking water at railway stations and trains in India. The government of India has an  87.4% stake in the company. It comes under the Mini-Ratna category status.

IRCTC website has around 5.5M logins per day and a transaction volume of over 25M per month. It is one of  Asia's most transacted websites.

IRCTC has the most cost-effective route to book tickets, compared to other online travel agents 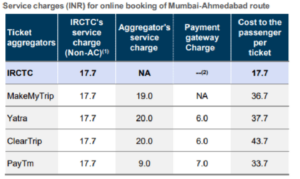 IRCTC is expected to benefit from the shift to online booking given the currently prevailing COVID-19 pandemic.

It charges a nominal convenience fee of Rs 15 for Non AC and Rs 30 for AC Tickets.

E-catering has grown at a tremendous CAGR of 157% from FY16 to FY20 in terms of the number of meals  booked. As of FY20 end, 690 vendors were providing e-catering facilities at 358 stations. Some of the key food  brands which are catering are Domino’s, Subway, Haldiram’s, Faasos. According to this facility, partner restau rants pay a commission of 12% to IRCTC. 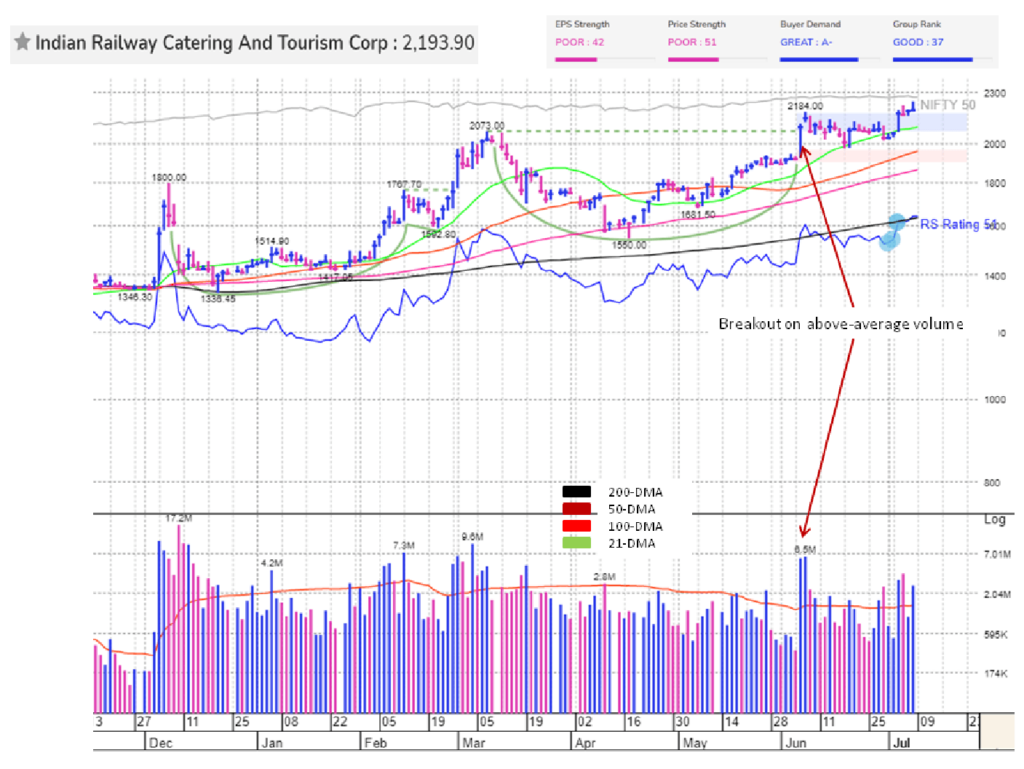 Ease Trip Planners is the fastest growing and only profitable online travel agent (OTA) in India. It provides  end-to-end travel solutions for all travel needs under one roof. It provides a ticket booking facility, hotel booking,  customized holiday packages, visa processing services, travel insurance, and many others.

The stock was listed on exchanges in March. After two months of consolidation, the stock price zoomed 100%  within a month. Currently, it is consolidating its gains and trading along with its 21-DMA. It has a good RS  strength of 82 and an A/D Rating of A+.

The OTA industry has grown at a CAGR of 20–22% in India (based on gross booking revenue from FY15 to  FY20E). Ease Trip has a majority of its revenue from airline ticket bookings; in FY20, this revenue stream grew  37.3%. The company is entering into partnerships and arrangements with various international airlines to  increase the volume of bookings.

The hotel and holiday packages segment has higher profitability compared to airline ticket bookings. It has been  putting continuous efforts to expand the category. To provide a better experience to customers during an inter national holiday, it has acquired/incorporated subsidiaries in the U.K., U.A.E., and Singapore.

Leveraging the existing company’s travel agents network, it is able to reach out to more customers especially  in tier 2 and tier 3 cities.